"I did this Burner for all the rebels out there who didn't believe the 9-Eleven hype.

(9-11 was a CIA hit meant to springboard the war on terrorism/the war on the people). I did this Burner for all the HipHoppers who managed to think for themselves when the odds of patriotic bullshit was stacked against them (Critical thinking is a must). This Burner is for the street-soldiers out there who ain't afraid to stand up against this Racist Amerikkkan war machine (don't let fear control your mind,stand up!). This Burner is for all the Guerrillas out there speaking through the HipHop codes of Aerosol Culture (use your culture as a tool for liberation). "Illegal Business Controls Amerikkka...your President is COUNTERFIET... Truth and Justice will prevail...Capitalism has sucked on the people's blood too long, the exploitation (abuse) must be stopped! Make your voices heard, keep the HipHop Hip, GET ORGANIZED!

as for the rest of you patriotic sap suckin' clones...consider yourselves warned, You yankee Bastards! ...bling bling on that shit. - REFA ROCK REBEL KTD"

In Madison WI by Don Wettach and Rob at Mother Fool's Coffeehouse. 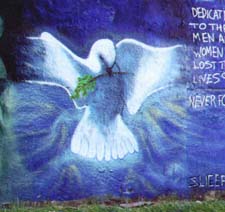